Several tribometers are available at the KTmfk for friction and wear tests that are carried out on both simple test specimens and machine elements. In order to gain basic knowledge about the friction and wear behavior of material and surface combinations, pin-on-disc tribometers are used with which tribological measurements according to DIN 50324 can be carried out using specimens with simple geometry. 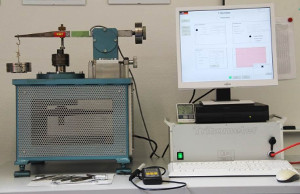 Tribological model tests under air conditions can be carried out on a pin-on-disc rotary tribometer SST. This allows a quick and cost-effective comparison of the friction and wear behavior of different material combinations in different intermediate media. A fixed ball is pressed onto the constantly rotating disc with a predefined force. Friction track radius (= horizontal distance of the ball center from the rotation axis of the disc), rotational or sliding speed, normal force and pressure over the ball diameter can be varied. In addition, defined quantities of lubricant can be introduced into the contact. The result is the course of the coefficient of friction over time, the rotations or the glide path. The available measured values can then be used to determine comparative parameters such as initial, average and stationary coefficient of friction. The wear behavior can be tested in a tactile manner or by light microscopy from the friction track after the tribological stress (tribometer test). 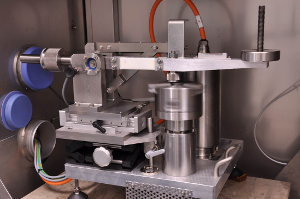 A climatic pin-on-disc tribometer K-SST-1 is used at the KTmfk for pin-on-disc tests under defined ambient conditions with regard to temperature and/or relative humidity. Like its non-climatic “brother”, the K-SST-1 also impresses with its versatility. In addition to uniformly rotating operation, cyclic tests with a wide range of swivel angles, accelerations and speeds are also possible. Due to the integration into a KPK 200 climate chamber from Feutron, the test climate can be selected in ranges from -20 to +50 °C and 10 to 98 % relative humidity. The test spectrum is thus considerably extended and the test conditions can be adapted to the corresponding application or better reproduced, respectively. 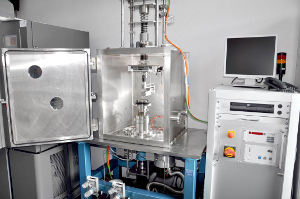 In contrast to conventional systems, special mechanisms, for example in space, X-ray or fusion technology, must work reliably under exclusion of air. Material pairings which have excellent sliding properties under normal ambient conditions can exhibit completely opposite behavior in a vacuum, since their good sliding properties are only triggered by reaction of near-surface boundary layers with components from the air (e.g. graphite). Only a few research institutes have test rigs to determine suitable material combinations for such applications with regard to low friction. In the TV-SST-1 tribometer, layers can be tested in a vacuum of about 10-4 mbar and up to 300°C. 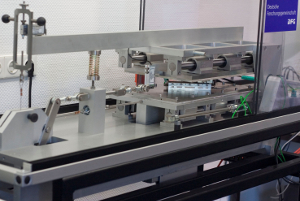 A load scanner type TE 69 from PHOENIX TRIBOLOGY is available for tribological-mechanical testing in sliding contact under medium and high loads. In different test configurations, two test specimens are moved against each other at identical speeds. With the aid of a force-displacement coupling, the normal force on the contact pair is increased or reduced linearly when the specimens move. In a conventional test configuration with two cylindrical test specimens arranged crosswise, the wear and damage phenomena occurring for both the base body and the counterpart can thus be traced back to a defined load condition. An alternative test configuration also allows the control of the normal force independent of the movement of the test specimens. 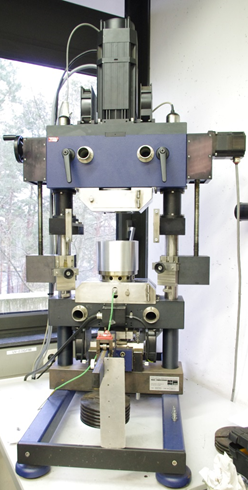 The WAZAU tribometer (type TRM 1000) is used to test and simulate friction and abrasion processes under (flat) sliding loads. It can be operated with solid state friction without lubrication and with boundary or mixed friction with liquid lubricants.
In the standard test principle, a stationary specimen (pin, ball or disc) is pressed against the end face of a rotating disc with a defined normal force. Both test specimens are arranged vertically one above the other, with the rotating disc at the top. The normal force is applied by a weight lever with a corresponding weight. The modules are mounted on top of each other and can be moved on two vertical columns. During the test, the normal force, the ambient temperature in the pot, the linear path of both friction partners, the speed and the friction torque are continuously measured. The sample pot can be heated between RT and 150 °C. The change in path is measured between the upper and lower specimen clamping. 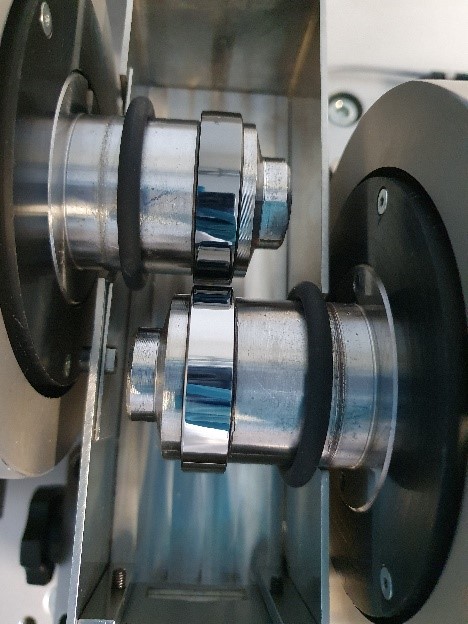 The 2disc-VAC , a two-disc test rig developed by Optimol-Instruments, represents a proven test method for materials, coatings and lubricants in highly loaded, lubricated rolling contacts such as those found in rolling bearings, gearboxes or cam followers. This allows function- and application-oriented investigations to be carried out on tribological systems under sliding, rolling and oscillating loads. Two disks of cylindrical geometry or defined crowning are mounted on two rotating drive shafts and pressed against each other at their circumferential surfaces. The variables load, temperature, speed and slip can be varied dynamically. Separate drive control allows adjustable slip or independent speed control. These variables, as well as the frictional force, can thus be measured continuously with the 2-disk test rig.